A group of scouts and their accompanying leaders enjoyed a 15km plus hike along one of the most beautiful coast lines of NSW. The group had the pleasure of pitching camp for an overnight stay, going to sleep under the stars to the sound of the waves and waking up to the bird calls that still ring out in the Australia bush for those who take the time…

The hike was  the result of a lot of hard work by Ben who has planned, coordinated and ran this event, experiencing what it is to pull an event together in peoples busy lives. Ben is to be congratulated in achieving this mile-stone.

The group added to their experience on the trail with some community service along the way which they did by cleaning up some of the trails of fallen trees/bushes etc so that the ground around the area might not be disturbed by people making a new trail in what could have been an endangered zone off the tracks. They worked hard at that one…. even breaking the top off the folding saw that was available. They did all that as a team, and in sharing the duty of 'sawing' off the bits that could be sawed to clear the trails.

They had fun exploring the 'caves' along the main beach to Brooms Head on our second day. Mikey got some good photos with the little GoPro he was carrying…. We all know Akela Sue is well known for her stunts on activities and this time was no different as the scouts thought Akela was nuts, taking photos of Cub-Be bear participating in some of the activities as well.

Ben and other Scouts from Grafton are now attending the World Jamboree in Japan where they are continuing to build on their lifes experiences through Scouting. 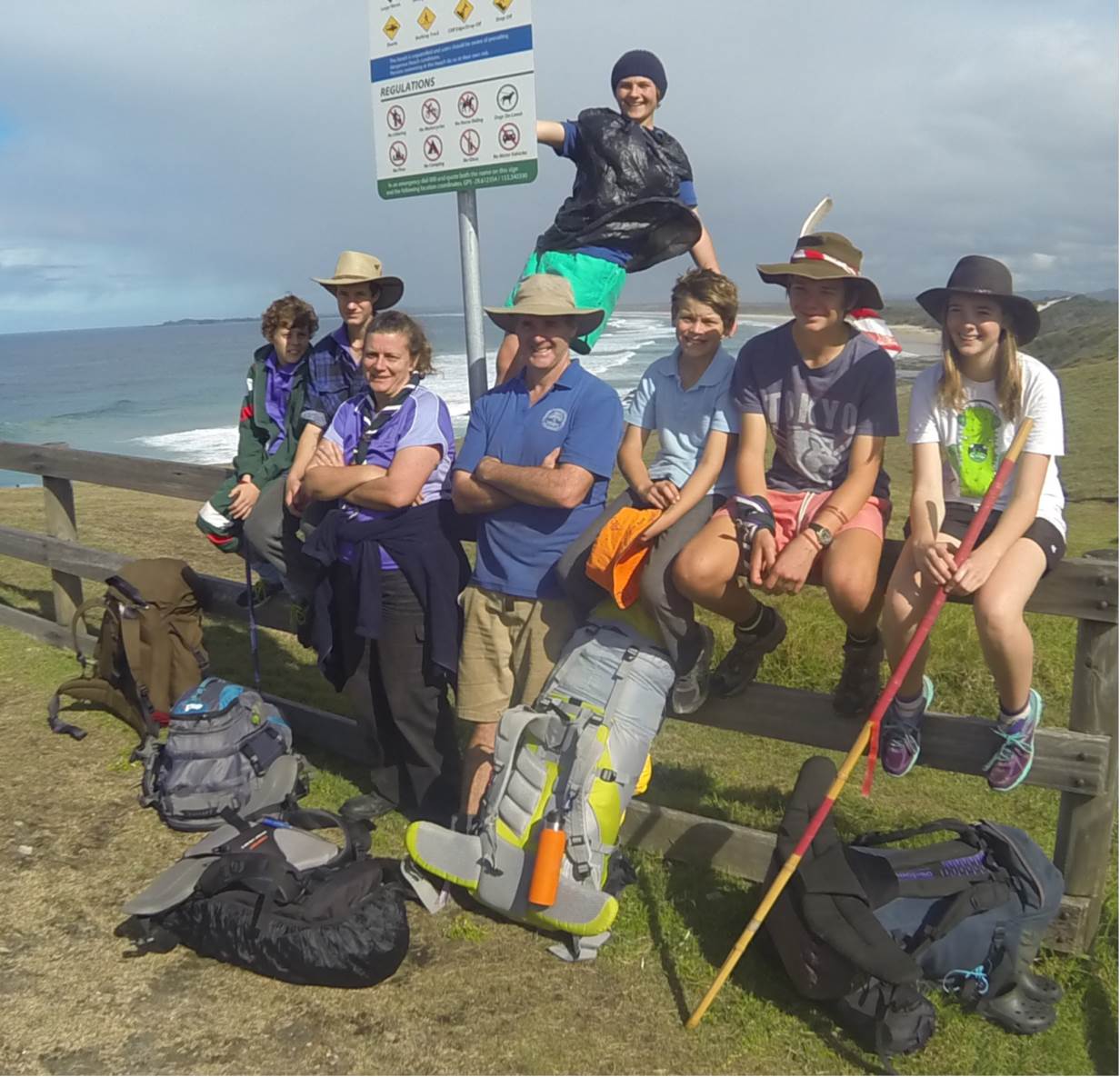 On the weekend of the 13th and the 14th June, 5 brave scouts (Blake, Abi, Jacob, Matt and Mikey) joined me and 2 leaders (Akela and Brumby) on an amazing hike in Yuraygir National Park.

I started organising my blue cord hike during September of last year with choosing the destination. The Yuraygir Coastal Walk.

In January this year I completed my paperwork and handed in my work as a proposal for a hike, but sadly it was rejected as the date was inconvenient.

I updated my paperwork and handed it back in on the 2nd April getting approval for the hike to go ahead on the weekend of the 13th and 14th June.

Because the whole hike would take several days I decided to do only a section of it. The section I choose was Angourie to Brooms Head, which met the required amount of 15 kilometres to complete the blue cord.Participants

Blake – He kept everyone in good spirits during the whole hike no matter the issue.

Matt – He kept soldiering on without asking for breaks or assistance.

Abi – It’s a struggle keeping boys in check but she managed it. Somehow.

Jacob – Even as a latecomer to the hike, he pitched in with the odd jobs around the campsite and carried some extra gear on the second day.

Mikey – He was a valuable photographer.

At 9:50 we meet up at Mara Creek near Angourie

At 1:15 we started walking again

At 3:30 we got to the campsite at Lake Arragan and set up fire, tent, etc.

At 4:30 we started cooking and eating dinner

At around 7:00 everyone was out of bed and we started on breakfast

At 8:30 we did a little bit of badgework

At 10:00 we headed off to Brooms Head on the final stretch

At 1:00 we made it to Brooms Head and had lunch

At 2:00 everybody went home

No accident occurred because Blake stayed away from sticks and poles.

There were a few mozzies.

Some were sore from carrying their packs-maybe we should do this more often.

What did I enjoy?

A BIG BRAVO TO AKELA AND BRUMBY FROM ALL THE HIKERS